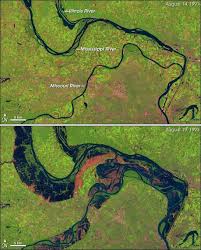 The St. Louis Post-Dispatch in their editorial 20 years later, “On July 30,1993, Gumbo Flats ceased to exist.” Over many years a large expanse of Missouri River floodplain, protected only by the equivalent of a farm levee, had been allowed to develop, with a general aviation airport, restaurants, shops, stores and industrial buildings. On that Saturday morning, I watched television news in disbelief as the engorged Missouri River over-topped and broke the levee, and the river poured into the breach.

When the big “Rain Machine,” as the press dubbed it, settled in for the summer of 1993, storm after storm traveled up a virtual train track, trapped between low pressure in the upper Midwest and a persistent high in the southeastern states. The result was instant Venice, with rescue boats the only means of transportation. Up and down the

streets, flooded shops, businesses and bare electric poles stood like lone sentries in the watery landscape. Airplanes tossed around by the surge looked like so much flotsam and jetsam after a high tide.

Today, the levee has been improved to Corps of Engineers 500-year-frequency flood standards. Land developers rechristened the area, “The Valley,” wishfully evoking Southern California’s fertile and fashionable San Fernando Valley. Experts shook their heads at the time of the Great Flood of ‘93, as I do now that the area has been rebuilt, saying, “I told you so.”

In the seventies and eighties when these projects were created, I didn’t say much about all this folly because my living depended on it–helping developers plan and build such projects in floodplains.

Environmentalists have called out such developments for altering river ecosystems, increasing flood levels on the opposite side of the river and downstream and future risk to developments located in the floodplain. However, these projects continue to be built. They often yield great economic benefits for their communities in the short run. As planners, we tried to compensate with high environmental quality. For example, we made one such a project “a city with in the city.” We hoped diversifying land uses would not only speed up land sales, but would also cut down on transportation loads for surrounding highways. It would be convenient to live, shop and work, all within the same site. Moreover, we made the sites nature-friendly, with handsome buildings set among trees, lakes and walking trails. Such diversity in land uses has made a comeback, earning a respectable new name, “Mixed Use Development.”

Patrick MacKenna, my fictional architect-planner hero, is in a similar bind. He knows it’s probably not in the public’s best interest to create large development projects behind levees in river floodplains. But his best clients require him to do it. He reluctantly obeys, with great misgivings when he discovers that not only can nature overrun man’s plans. Such construction is also more vulnerable than any other site to disruptive environmental objectors he muses. “We can stay ahead

of nature most of the time. But when one of our own decides to oppose us, he can undo all our work.” While urban existence is frail—subject to wind, weather, ice and climatic extremes—flooding seems to be such an unavoidable calamity.

In Crimes of Design, a Patrick MacKenna mystery, this architect and amateur sleuth faces the unpopularity, vulnerability and sabotage of such a project. To clear his name, rescue his career and save his life, ,he must overcome these obstacle, conquer own weakness and solve the crime.. In fact, award-winning Author Rick Skwiot calls it “a ‘flood-plain noir’ mystery, that weaves a complex tale of murder, eco-terrorism, love, lust and betrayal.” Read about Patrick’s struggles to control the natural environment, the built world and man. Get your own copy at my website, Barnes & Noble or Amazon.com .