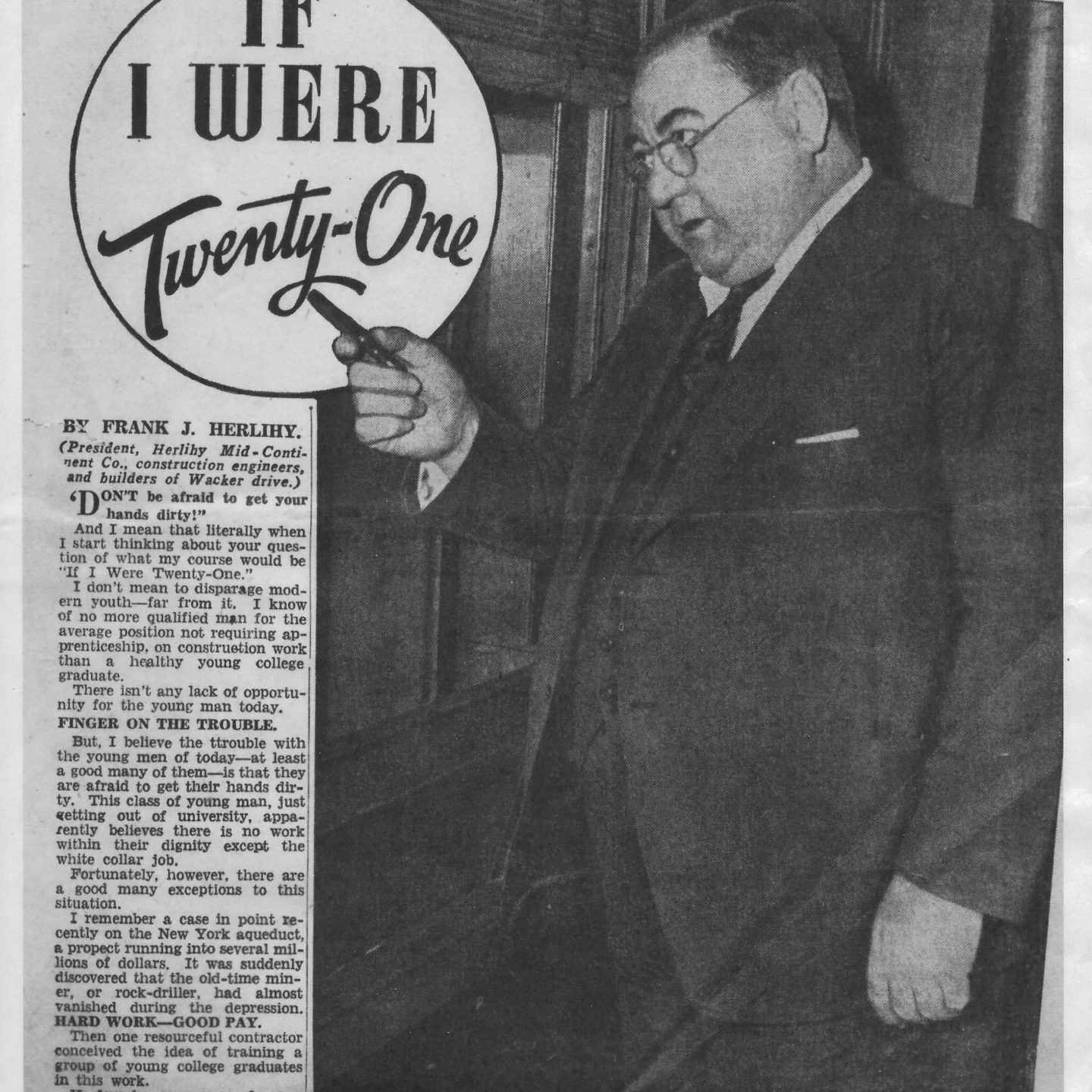 “Don’t be afraid to get your hands dirty!”  Grandpa’s advice appeared in a mid-1930s Chicago Herald-Examiner series, If I were twenty-one… Since many will seek new careers as America recovers from the pandemic, this is advice any young man or woman should follow today.

My grandfather, Frank J. Herlihy, was president of Herlihy Mid-Continent Company, construction engineers. A self-made man, he attended night school to learn engineering and cut his teeth on construction jobs. He built bridges and railroad track in 1913 for the Milwaukee Road, to extend the railroad to Seattle and complete expansion of the Northwestern United States to the Pacific. Next he directed construction of a major aqueduct from Canada to New York City. In the article he said:

There isn’t any lack of opportunity for the young man today.

But I believe the trouble with the young men of today — at least a good many of them — is that they are afraid to get their hands dirty. This class of young man, just getting out of university, apparently believes there is no work within their dignity except the white-collar job.

He pointed out that, even in the Great Depression, there were a good many exceptions to the situation. In today’s world he would be talking about young men and young women. However, despite this cultural bias of the day, he was ahead of his own time. He put his finger on the problem:

I remember a case in point recently on the New York aqueduct, a private project running into several millions of dollars. It was suddenly discovered that the old-time miner, or rock driller, had almost vanished during the depression. Then one resourceful contractor conceived the idea of training a group of young college graduates in this work. He found a score or so of young huskies, fresh from the campus, who weren’t afraid to get their hands dirty. Intelligent and well educated, they soon developed into the most efficient workers this contractor ever had.

Grandpa, an inveterate self-promoter, was of course referring to himself in the third person. This was a trick he often used: writing his own press releases. These were often snapped up by busy newspaper editors with looming deadlines and printed exactly as he wrote them.

I followed Grandpa’s advice. After his passing, my Uncle Frank, his son, took over management of the company. When I was in college and seeking summer work, he gave me a summer job and sent me to a school construction site in Kalamazoo, Michigan. There I took measurements for fabricators, followed the surveying crew, observed bricklaying and did many other tasks for a large high school. One day after work I even got personal instruction from an old-time master mason. Although I intended to study architecture as my college major, my uncle held out hopes that I might join the company one day. I didn’t, but it turned out to be excellent preparation for my architectural career.

Objections from the workmen

At first, Grandpa’s trainees would occasionally run into objections from seasoned workers on the job:

Three or four weeks ago we secured the services of a young college man — a graduate civil engineer — on one of our transmission line jobs.

He was on the job about one day when I had a plaintive report from workmen on various jobs involved in the project: “That kid isn’t satisfied with just running his surveying instrument. He wants to pitch in to get up setting anchors and parts of the towers and doing all sorts of extra work. The men don’t like it very well!”

The kind that dirty their hands succeed

I liked it and tried to smooth out the trouble. It wasn’t hard, because the boy had such a personality that he won the admiration and respect of the men in a short time. Now, I’ll bet you that within two or three years this young man will be a full-fledged superintendent, fully capable and qualified to take a responsible charge of construction work of magnitude. He is the kind of man that any successful contractor is praying for.

He founded the company in 1919 and reorganized in 1924. Finances were pretty slim. He said they found people who were more interested in working for the future than in watching the clock and collecting a paycheck. Their first contract, which wasn’t a large one, did net them enough money to bid on their first really big one. That was the $25 million Wacker Drive project. They won and it made construction history.

Due to the pandemic over the past year, many young people with or without a college education have lost their jobs. Whether they were in the service sector or other businesses, they have been forced to refocus their career objectives. As the economy recovers, they may feel that there will be strong competition for good jobs. But my grandfather noticed something even back then. There does seem to be a shortage of those who are willing to do more than the job, with an eye on the future. They will give up some leisure time and do anything on the job that might pop up. In other words — they will dirty their hands.

Young people today will find good jobs in new places, other than office careers. In St. Louis, for example, construction companies and labor unions have opened their membership to diverse groups. They have made opportunities to enter both management and skilled labor jobs, with training institutes, apprenticeships and advancement programs. Employers need workers who will dirty their hands. Skilled vocational training at community colleges and other schools offer pathways into industries formerly difficult to enter.  New jobs are opening up in solar power, electric vehicles, and infrastructure construction. There will likely be many new positions for those who aren’t afraid to follow my grandpa’s good advice from long ago: Don’t be afraid to get your hands dirty!

Join the Writer Insider for publishing news, book bargains and to get monthly news.