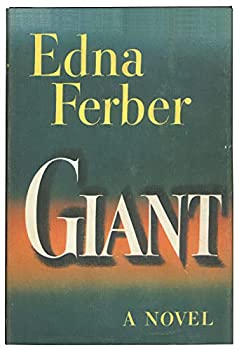 In her 1952 work Giant, Edna Ferber chose the novel form rather than a long, boring trilogy, she says, to help us understand Texas. She presents an intimate and sweeping panorama of this sprawling state–its past, its more recent development and its future. In an era when politics has become divided and acrimonious, it helps to examine every clue available to unlock the secrets of this state’s seemingly foreign and baffling culture.

When Leslie Lynnton, middle daughter of a dedicated Virginia doctor’s family, meets Jordan Benedict, co-owner and chief operator of a family ranching operation, sparks fly. He has come to the ramshackle Virginia farm to buy a prized horse, but he stays longer when riveted on the spot by their beautiful and intelligent daughter. He stays until Leslie accepts his proposal of marriage. She leaves her world of diplomatic dinners, society events, beautiful hills and forests and intellectual stimulation from the nation’s capital of the 1920s, as the women in her family always have, determined to immerse herself in her husband’s livelihood and life and understand her new home.

The drama opens with Leslie’s arrival at Reata (Spanish for lariat) Jordan’s ancestral home, built like a medieval fortress and serving as a multi-room hotel for visitors from far and wide. Through her foreign, East Coast eyes we learn of this vast and spectacular kingdom. Three generations of the Benedict family have grown their ranch through sharp practices, Spanish land grants and astute purchases covering two and a half million acres—over 57 square miles—and supporting millions of beef cattle.

Already an accomplished horsewoman, although on an Eastern saddle, Leslie is fascinated by its gardens outbuildings, range lands, cattle raising and breeding  and innovative techniques to improve the stock. And even the impoverished dwellings of the vaqueros and their families, the migrant workers upon whom the economy of the ranch depends. Leslie is fascinated by the big country: a vast, treeless, flat and unmercifully hot and endless terrain. Sticking her nose into “men’s business” where her husband doesn’t want her, she visits the squalid hovels of the Mexican servants, vaqueros (Mexican cowhands) and their families. They labor at slave wages to support the vast operations of the ranch and to subsist. They are obsequious, hard-working and friendly, despite their appalling living conditions.

To meet the new wife of the region’s most prominent citizen, Texas wives visit Reata and pay their respects to Leslie. They offer their generous hospitality and try to learn how she landed this hard-riding, driven and dictatorial bachelor, chief operator of this vast cattle enterprise. She must also deal with Jordan’s much older sister and mother figure, Luz Benedict, who acts as  his partner and runs the household with an iron hand. While Leslie tries to understand Texas and adapt to their society, yet she yet asserts her authority as his new bride to make a few changes. She insists they move from the hotel-like atmosphere of the big house to the old original one-story ranch house, where they can relate without the presence of innumerable guests and a large, intrusive staff and interact as a nuclear family

Ferber’s style rises to the lyrical as she further enables us understand Texas. She makes us feel the severe beauty of the barren landscape, the millions of cattle and the cohesion of the Texans’ society. They think nothing of riding for hours on horseback or carriage–in a later era they travel by car and plane–to attend weddings, funerals fiestas, barbecues and support their far-flung community. Jordan, known to all as Bick, must juggle multiple family member-owners, manage vast ranches across the state and keep the operation solvent. Nonetheless he invests all his profits in improving the breed of cattle from the original Longhorns’ tough leather-like meat to Herefords and eventually to hump-backed Kashmir breeds. At last he develops a tender, disease-resistant and hardy new breed of beef cattle.

Like his fellow Texans he also perpetuates the subordination of women to a domestic and ceremonial role. Despite such opposition. in the early twentieth century emergent women assert themselves here, as in the rest of the country. Ferber’s genius shows us how their industry evolves and society progresses. Eventually it includes oil wealth, women’s equality and social progress into the 50s with hopes it will continue into the future.

I have strong motivation to understand Texas. My daughters both married Texans; neither son-in-law will ever willingly, or at least happily, leave the state. I was privileged to know both husbands’ parents. One son-in-law’s father and mother were descended from such ranchers as Ferber describes and spoke with a broad Texas accent — Tay’-ex-sis, for example was for them a three-syllable word. The other’s parents worked in the high-tech computer industry and typified the modern suburban family.

Texans are often brash, self-assured and controversial. But their warmth and friendliness overpowers many political disagreements or doubts one might have about their sincerity. To know them is to love them. Their genuine friendship helps bridge wide gaps in our differences of philosophy. Most of all, after reading Giant I began to understand Texas.