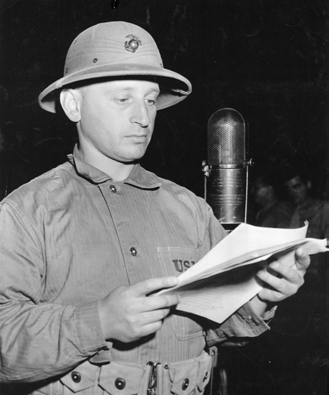 On August 14, 2020, we will celebrate the 75th anniversary of Japan’s surrender, ending World War II. My dad, Private First Class Ben Green, a seasoned ad man who had assumed management by default of Armed Forces Radio Station WXLI, Guam, slapped the news on the air a 3:58 PM local time. Armed Forces Radio Service Headquarters in San Francisco picked it up immediately and fed it to the stateside networks. In the middle of the night, ecstatic citizens reopened restaurants, paraded through downtowns and celebrated across the country.

Ben’s sense of patriotism was strong — but almost everyone felt that way after the Nazi invasion of Europe and the last straw, Japan’s attack on Pearl Harbor. He was scornful of those who did not share his feelings, especially of well-known celebrities like actor John Hodiak and celebrity toastmaster Ralph Edwards, who widely publicized their willingness to serve, but when Uncle Sam called, their lines were busy.

Webley Edwards, then a member of Dad’s WXLI staff, spoke for the crew at the Guam radio station and all Americans when he summarized the reaction on the strategic island about two hours later, in his crisp but war-weary tenor voice: first announced over on Guam announced

A wild shout was our first knowledge that some- thing had happened. Domei had just announced that an official announcement would be made shortly, and some men here held their breaths almost in hope that there was no possibility that this could be another false one. It was amazing how quickly word spread through this Island of Guam. A truck full of Seabees came hurtling down the highway, all yelling. Workmen dropped their tools and stopped their bulldozers to find out what this news might be. Out of a building here at CincPac came a long, shrill whistle and a bustle of running, and all turned and looked at one another; and the question came quickly, “Can this be it? Can this be the one we’re waiting for? But men looked at one another and smiled wanly.

It was mid-afternoon here, just after four o’clock. We’re very tired; we have been up for many, many hours. And we were slightly incredulous. I still can’t think it through. And just as I say that, I know it’s being said by all men who’ve been considering this thing here today. If the Japanese have accepted our final surrender terms, and I’m pinching myself to see if I’m awake, this long, dreary war could be over. And even as I speak, the air is filled with messages passing information and instructions to ships of the Pacific fleet and subs and airplanes in flight.

The long-awaited word was received here almost casually. Its impact was terrific; we were stunned. We’ve not had time for any general tumult. There have been so many alerts and false alarms in the past few days that this is a sort of anticlimax. There are plenty of skeptics who just can’t bring themselves around to believing it’s all over. We’re holding ourselves here with bated breath. This is Webley Edwards at Guam. I return you to CBS in the United States

–Source: U. of Mo. Voices of History archive

Dad’s  letter of Tuesday, August 14th, “a little after midnight” (Guam Time), was all in caps, appropriately enough, as a result of the news typewriter which happened to be available to him at the moment:

AT LONG LAST, THREE YEARS EIGHT MONTHS AND ONE WEEK… AND NOW IT’S REALLY OVER. OUR FIRST FLASH WAS ON THE AIR AT 3:58 P.M. WHICH IS REALLY ABOUT 2 A.M. YOUR TIME… FROM THEN ON THE STORY STARTED TO BUILD… I WAS IN OUR OFFICE… KANI AT CINCPAC ….HE HAD JUST GIVEN ME A STORY ABOUT A B-29 ATTACK, AND I WAS PREPARING TO PUT IT ON THE AIR, WHEN THE PHONE RANG AGAIN. IT WAS KANI OUT OF BREATH WITH THE DOMEI FLASH….. WE SLAPPED IT ON THE AIR AND THEN AT 4 P.M. TWO MINUTES LATER TOOK SHORT WAVE FROM SAN FRANCISCO POINTING OUT TO OUR LISTENERS THAT SAN FRANCISCO DIDN’T HAVE THE STORY THEY HAD JUST HEARD OVER WXLI…

LITTLE CONFIRMING THINGS KEPT COMING UP ALL DAY…… THE BERN SWITZERLAND STORY. …THE REUTERS DISPATCH AND FINALLY JUST A WHILE AGO THE WHITE HOUSE STATEMENT CONFIRMING THE FACT THAT A REPLY WAS ON ITS WAY FROM SWITZERLAND. AP CREDITED THE GUAM RADIO WITH MAKING A FLASH ANNOUNCEMENT HERE, WHICH YOU MAY HAVE READ OR HEARD REPEATED IN THE STATES … THAT WAS US!…

Dad and his crew were first in the world to break the biggest news of the war, a scoop, a newsman’s dream. But perhaps more important to him than all that, he and those who had any part in World War II had shown their ultimate patriotism — put themselves in harm’s way to secure our country and sustained the path of right in a turbulent world.

Patriotism has many definitions these days: defending the right to vote, making democracy in America more perfect for citizens of all races, religions and cultures and opposing tyranny from without and within our borders. My dad’s definition was to leave a comfortable life, a good job and a growing family to fight enemies of our way of life. Despite having two young children, he volunteered at age 35 for service in World War II. These days, when the definition of patriotism is strained to the limit, it might be of benefit to the public understanding to reconsider what the word really stands for.

Is such patriotism a thing of the past? When we consider the lifelong bravery and persistence of John R. Lewis, in demanding and securing civil rights, whose memory the world honored this week, we realize patriotism is alive and well. On this anniversary of the end of  the world’s most deadly war –and in the midst of another battle, this one against the coronavirus—we must pause and thank the heroes of World War II and other conflicts, and what they were willing to sacrifice to keep us free.

You can read the humorous and heroic adventures of Ben Green—a  husband, father and taxicab jockey turned useful warrior in my biographical memoir, Ben’s War with the U. S. Marines, first released on the 60th anniversary of the Japanese surrender. Available in