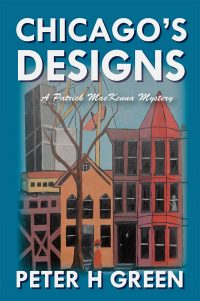 Isn’t organized crime, “the mob,” a thing of the past? Not so, according to Brian Bardsley, Jr., Chicago Police SWAT Team leader and medical response specialist. It has merely gone respectable, although not legit.  Over a half-century ago, after the FBI, the Kefauver Commission and RICO, the Racketeer Influenced and Corrupt Organizations Act, dismantled the existing crime syndicate, many of its operators carried on, acquiring legitimate businesses, conducting illegal rackets all the while, underground and out of the public eye.

Patrick has it made, or so he thinks

Along comes Patrick MacKenna, the main character in my mystery-thriller series, who learns this lesson the hard way.  Patrick–a lover of beauty, fine old things and fine young women and son of hard-working Irish parents, who run a popular downtown pub–has a foothold on an architectural career, with some help from his uncle, a successful but successful but opportunistic building contractor To quote one of my readers, author T. W. Fendley:

When a womanizing young architect meets a mobster with a multi-million-dollar casino project and a beautiful daughter, what could go wrong? For Patrick MacKenna, “Chicago Joe’s” plan to go legit is the career break he’s been looking for, and dating the mobster’s daughter is icing on the cake. Then Patrick finds himself attracted to a lovely barmaid fresh from Ireland, jeopardizing the deal and maybe even his life. With a murder investigation already linked to the casino property, Patrick turns amateur sleuth to find out who’s responsible. This intriguing glimpse into Patrick’s early years brings together fast-moving action, architecture and romance in a satisfying prequel to the Patrick MacKenna mystery/thriller series.  –T.W.  Fendley, Author of the Zero Time Chronicles

In Chicago’s Designs, the latest Patrick MacKenna mystery, Patrick’s troubles multiply from his original predicament. The mob, law enforcement and family pressure he fears, will obstruct his good intentions to help solve the case and finish his project, especially since mob members don’t like anyone to dishonor their women.

The trouble begins when, one morning on his way to work amidst the splendor of downtown Chicago’ s historic architecture, Patrick spots a well-dressed man on a window-washer’s scaffold. His self-trained powers of observation lead him to puzzle what this character is doing up there. Crossing the Loop a while later, he finds police swarming over this building and discovers it is the site of a gang-style murder. As a material witness, he is suddenly involved.

Best mystery…since The Devil in the White City

Peter Green’s two central themes, Architecture and Chicago, are linked with magic. His descriptions of Chicago architecture, the city of big shoulders and mob activity are strikingly similar to my own observations as a young architect in Chicago.  Green’s insights into architectural practice are spot-on. Rich, exciting, fun and a real page turner… this is the best mystery of architecture and Chicago since The Devil in the White City. –Robert O. Little, Former President, Ittner Architects.

As an architect and city planner who grew up in a family of writers, I found my father’s 400 World War II letters, his humorous war stories, my mother’s writings and my family’s often hilarious doings too good a tale to keep to myself, so I launched a second career as a writer. After years of architectural work and proposal writing for my design firms, I went back to Washington University to study creative writing. The amusing antics and serious achievements of my father’s military adventure, Ben’s War with the U. S.  Marines, and my first Patrick MacKenna Mystery, Crimes of Design, were republished in 2014 by Greenskills Press. A new Patrick MacKenna Mystery, Fatal Designs, appeared in early 2015. In 2016 the second book in my Voices of World War II series, Radio: One Woman’s Family in War and Pieces appeared. Chicago’s Designs  is my third Patrick MacKenna mystery and my fifth published book.

There’s much more about the challenges of being an architect, Chicago’s famous buildings and the humorous characters Patrick must deal with in this fast-moving adventure. But I’ll let you discover that for yourself. The book launches on September 20th, so you’ll be able to receive your own copy, or you can order online , or order it at at your favorite bookstore to read and enjoy.

Till next time, good words to you,