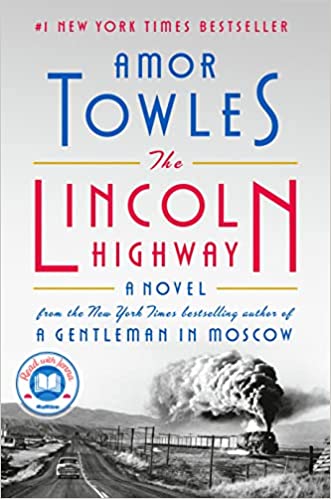 In Amor Towles’s magical epic, The Lincoln Highway, set in the early 1950s in the Midwest, Emmett Watson becomes the epic hero. Long since abandoned by his mother and recently orphaned by the death of his father, he returns in the warden’s car to his family’s Nebraska dust bowl farm. He has just finished serving a sentence in a juvenile work camp, convicted for an accidental killing when fighting off a bully. Emmett plans to set out on the nation’s first coast-to-coast route, the Lincoln Highway, in his hard-earned Studebaker with his much younger brother Billy to San Francisco to start over in his own home renovation business.

Listen to Peter narrate this review on You Tube: https://youtu.be/kCTokKOVfUA

His plans are interrupted by his two former bunk mates, Duchess and Woolly, who have escaped by stowing away in the warden’s trunk. They try to convince Billy to make a detour to New York State to claim Woolly’s rightful although delayed inheritance. But Emmett balks and his long-time admirer, neighboring farm girl Sally, bitterly resents the idea. Nonetheless, his two bunk mates steal his car and involve Emmett and Billy in a cross-country chase that becomes for the two brothers an eye-opening look at a much wider world.

Throughout their adventure, the wisdom of eight-year-old Billy and Sally’s common sense pull Emmett back from the many enticements and distractions they are exposed to. They try to refocus him on his own determination to build a life for Billy and himself. In the most improbable, risky and evil situations, however, miracles occur. They favor what seems like a fated outcome, raising Emmett’s and Billy’s slim chance to emerge from the grimmest of hard times into a romantic fairy tale.

My own encounter with this book was timely. I had just launched my new biographical memoir, the humorous and wide-ranging story of my own road trip and coming of age adventure. I was curious to learn where other young people’s ambitions could take them and found The Lincoln Highway to be an engrossing, thrilling and magical tale.

Until nest time, good words to you,

—Peter H. Green, Author of Becoming an Architect: My Voyage of Discovery