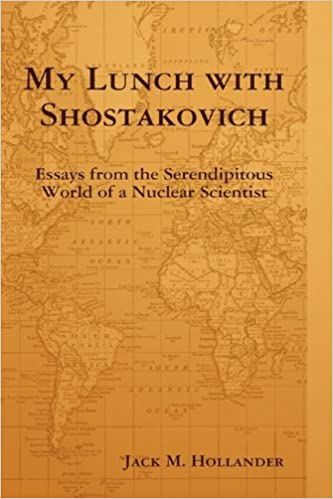 My writer’s journey began with letters I wrote home from college. Yes, we had long distance telephone service in those early times, but the good stuff — detailed descriptions of my doings, parental advice and our deepest feelings — were best expressed in those long, thoughtful ramblings, often written late at night.

I called my high school friend Mike the other day, to report to him that in one of these letters I described a trip the two of us made one weekend. He started in Boston, picked me up in New Haven and we set off for Philadelphia, with stops in New York City and Darien to visit friends, relatives and some girls I’d arranged to see. He was delighted to be reminded of that first of many adventures we shared. It was to be a dress rehearsal for our travels together throughout Europe in the summer of 1959. A book Mike sent me as a result of our phone conversation was by a colleague he said was a very good writer. My Lunch with Shostakovich: Essays from the Serendipitous World of a Nuclear Scientist. It was written by Jack Hollander, a fellow nuclear chemist and Mike’s close colleague at the UC — Berkeley radiation lab. Last week I finished reading it.

In recent years I have threatened to write an autobiography. Against my better judgment, I’ve concluded it should be my own. “How’s that?” you say. “How could an autobiography not be your own?” I did help help to write such a biographical memoir, however — Radio: One Woman’s Family in War and Pieces — my mother’s own life story. This sainted lady started it at least three times, and then her time ran out. She deserved a boost from someone who could finish her story. After all, I saw it all the way through to the end. And I had this urge, which she and my father nurtured throughout my formative years and beyond, to tell stories myself. To my dismay, and to my wife’s horror, I have succumbed to that pressing ache.

Two biographical memoirs and three architectural mysteries later, I am faced, as we all are, with the specter of Covid 19 and our mortality. It reminds me that the time for procrastination is drawing to a close. While I can still sit up and take nourishment, lift a pen and tote a laptop, I’ve got to get at it. Maybe this bizarre turn in American life has given you time to think about a long-postponed desire to write. I have more to tell you about how you could start. But first, back to my point.

I’m even toying with titles. I thought of Tales from the Plague: An Architect’s Secret Horrors. But it sounded too scary and depressing. At the very least I must come up with a title people will pick up and read. So I’ve settled on one with half a chance. The intriguing title of Jack Hollander’s book of essays suggested to me that I might pick a memorable and humorous anecdote in my own checkered career as a title for my biographical memoir, So I settled as a working title on the following: My Brush with Jack Benny: Adventures in a Misspent Youth

The book Mike sent me mentions my friend’s own role in the important nuclear research carried on at the Berkeley lab. In addition to creating the thousand-page research study for the 1967 edition of a new Table of Isotopes. The author also credits Mike as very innovative in his research techniques. I already knew he had no fear of disturbing the status quo: He invented an electrified lunchbox, complete with a short order grill under its lid, One day he cooked hamburgers during our high school lunch hour. He also created the Cornstarch Bomb, blowing a cone of the substance into a Bunsen burner flame to demonstrate the principle of a dust explosion in the chem lab. This delighted the nubile coeds at surrounding lab tables but further aggravated the chronic migraines of Mr. Clader, our long-suffering chemistry teacher.

It occurred to me then and there that I have had enough misadventures, missed opportunities and funny stories of my own to make my autobiography worth reading. With the prospect of a coronavirus dogging our society for the next couple of years, I have begun to write it. Perhaps even some serious tips on writing will be included. With all my experience in the past dozen years in the new and expanding world of publishing, I’ve accumulated plenty of useful tips and discovered some paths to success. I’m happy to share them freely on the Greenskills subdomain of this website.. Whether or not you aspire to write, as a reader you might be interested in what’s going on behind the scenes in a typical writer’s journey.

How about you? Have any of you given serious thought to preserving your family and biographical memoir for the benefit of your offspring and posterity? With an eye to helping fellow new writers avoid some of the false starts, dead ends and time wasters I have engaged in during my quest to get written and published, I began writing an organized blog resource called A Wriiter’s Journey. It is completely free and explores in considerable detail the various increasing paths to success in today’s rapidly expanding publishing and self-publishing industry. I have already begun compiling my own misadventures in the writing and publishing field in a special subdomain of this website, called: A Writer’s Journey, which features Ten Basic Skills Every Writer Should Know.

Pub 2.1 Your Genre and Marketplace Position (a Writer’s Journey)